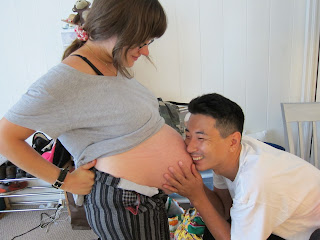 At around 2 am on July 11th, I woke up feeling a trickling sensation between my legs. I bunched up my pillow (I had been sleeping with a pillow between my legs to widen the hip area to prepare for birth) and shuffled over to the bathroom, and sure enough, there was a gush. I was half shocked, half excited. I cleaned up and shakily went into the computer room where Yasushi was and shakily went "I think my water broke". And he started to freak out a little bit going "What should we do? Call the midwife!" I called my midwife and doula and let them know what was going on, they both said get some sleep. Yasushi and I tried, but we were so excited it was hard to get to sleep. I was starting to have weak contractions about 7 minutes apart but managed to sleep between them somehow.
The next day I just stayed at home, going out a couple of times to walk and run last-minute errands. My contractions were still coming at 5-7 minutes, but nothing too intense. My midwife came over briefly in the evening to check baby's heartbeat and my blood pressure, and advised me to get as much sleep as possible that night, and if possible to go hiking in the morning. I tried to sleep as I did the previous night, but my contractions were getting stronger and I was awake more than I slept. I called my doula in the morning and asked her to come over for support as Yasushi had to leave for work. We ate breakfast, took a short walk in Waikiki, then a nap, then we went hiking at Manoa Falls. This really amped up my contractions and after we went home and I took a shower, they were still coming without slowing. They went to about 3-5 minutes apart and I started to need to use breathing and vocalization to cope with them. At one point, I went to the toilet, and the action of sitting on the toilet brought on a contraction so intense I literally jumped off and ran as soon as I was finished. My doula made me go back and ride out a few ones, as strong contractions would make me dilate faster. At around 6 pm, my doula informed me that I was in active labor. I still used coping techniques and my big white ball to combat the pain. At around 8:30, my doula asked the midwife to come over. and called Yasushi to let him know to try and come straight home at 9. Yasushi rushed home immediately. 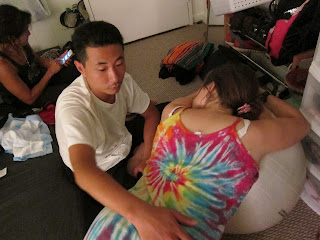 Over the next few hours, the contractions got more and more intense and constant, I had almost no breaks between them at one point and was living on Emergen-C drinks and V-8 given to me through a straw by my doula and Yasushi. I went to the toilet periodically, but I mostly sweat out all the liquids before that. My doula urged me to eat, and I tried to oblige some frozen fruit, but every time a contraction hit my appetite was completely gone. They prepared the pool, which felt lovely but I felt like I wasn't progressing. My calm breathing and vocalizing through contractions turned into whining. I started having urges to push, which were worse than contractions because they didn't really do anything and were painful. They suggested a hot shower with Yasushi, which would usually get plenty of love hormones going, but I was having none of it. I was in a cycle of contracting, pushing, and whining about it. I was tired and cranky and wanted to do the whole push, pop out a human, and then revel in the happy afterglow. I laid down on the bed and tried to sleep! But of course who would be able to sleep in an active labor, 9 cm dilated to boot! So of course sleeping turned into a little cuddle with Yasushi, and then hoisting my leg up and giving a screaming push, tiring myself out, laying back down going "why isn't this working why won't she come out??" I would come "so close" and then run out of energy to push. I honestly doubted I could do this, and a few times I asked "do we have to go to the hospital?" My midwife used several techniques to get me to open up and stretch.
I was in that "place" that every woman goes to when birthing. The "I can't do this, but if I don't this baby won't come out" phase....I wanted an easy way out so badly, if this were a hospital I would have been drugged and the baby pulled out a while ago. I felt so pathetic as I sat there and buried my head into Yasushi and asked my midwife and doula to help, and get her out of me already. They replied that she was almost out, and I was doing great work. Laying on the bed was not the most ideal position, but I was so tired out it was all I wanted to do. My midwife and doula tried a variety of other positions, birthing stool, etc, but I kept going back to the bed and hoisting up my leg and pushing. Her head had gone over my pubic bone, she was almost there. Finally, they suggested getting into a squat, with my doula sitting in a chair holding my arms and supporting my weight, and we tried that, and gravity seemed to help things along, but I still didn't have the strength to do it.


I saw the sun start to come up outside....my doula and I had been up for almost 24 hours. I was ready to give up about 6 hours ago. It felt like torture. I kept pushing, putting every last ounce of my strength in it, but it wasn't enough. I looked pathetically at my midwife after pushing and shook my head. She smiled at me, and I remember thinking "why are you smiling at a time like this?" and I looked down, and the head was out. This was it. I screamed like some kind of animal and pushed through my exhaustion, pushed through the pain, I didn't care, she was coming out, NOW. And my midwife stepped in to help Yasushi catch her, and hand her to me, but my body was dead to the world. My doula helped me hold her low on my chest, still squatting because her umbilical cord was very short. Chinami had a fabulous conehead from all of the pushing, and I saw her thick black hair, and her pale little hands. She looked around quietly, letting out a few cries every now and then. The midwife and her assistant went to work quickly, rubbing her vigorously to make sure she coughed up all the fluid and making sure she was breathing. I looked in her eyes and knew she was absolutely fine and healthy. I put my finger in her little hand and she gripped it tightly. I looked in her eyes and could tell that she knew who I was and who Yasushi was.


My doula, Yasushi and everyone worked together to get me at least laying down on the bed with Chinami. I was still absolutely pathetic. I kept asking would delivering the placenta hurt, and were there any drugs I could take now, and could they numb me down there quickly, etc. The midwife and her assistant kept reassuring me that it would not hurt to deliver the placenta, and that they would numb me and give me a few different kinds of natural things to help the pain. I delivered the placenta, which they were right, it was uncomfortable but not painful. Then I got numbed and a few little stitches, while Chinami got her cord clamped and cut (by Yasushi again) and started to breastfeed.


My midwife showed me the placenta and sac that raised Chinami for 9 months. She found something interesting that she had "never seen". The umbilical cord was not attached to the center of the placenta, it was attached to blood vessels that flowed to the placenta. I think this is called Velamentous cord insertion. If I had been in hospital care as opposed to midwife care, then the chances of it being made into a problem with all the inductions and threatened c-sections would have been very high.


My doula took the placenta to encapsulate it, but not before putting a chunk in a yummy berry-spirulina smoothie for me to have right away! This was not just to be adventurous, but because there are many benefits to ingesting placenta. The main benefits are reducing post-partum bleeding and increasing iron levels in the blood, and reducing the risk of post-partum depression, which with my history of never being able to donate blood due to low iron or low blood pressure, and depression and anxiety, this seemed like the right thing to do.


The ladies cleaned up the place and gave me another check to see how I was recovering, I was bleeding quite a bit but nothing serious, my blood pressure was stable and so my midwife gave me a shot of pitocin to help my uterus contract before going home.


Chinami soon fell asleep, as did we. I was happy, but absolutely exhausted and in pain and wanted to recover quickly so I could focus on her as much as possible.

My recovery over the past few days has been great. I have been able to rest in my own bed with Chinami, and do everything at my own pace without nurses telling me when and where to do what. And since my mother wasn't around, I didn't have to deal with any loud and belligerent monologues about how my house is not good enough, I should have rented that place in Waikiki that was way over my budget, I should get a clothes dryer instead of hanging my laundry like I'm in Calcutta, how could I possibly not have a TV set, why don't I use an air conditioner, it's too hot, why do I put my mattress on the floor, why don't I have a crib for Chinami, I should n't have bought everything secondhand, etc, etc, etc....


And now a little reflection...
Birthing is hard. I didn't have a magical orgasmic water birth or a surprise birth in the kitchen, I was in the pushing stage for about 5 hours. If I had birthed at a hospital, I probably would have gladly accepted any intervention they gave after I reached my point of no return, and it might have been faster and even easier, but would it have been the best way? When Chinami came out, she was calm and happy, and she wasn't bathed, injected, or taken anywhere except straight to me and her daddy. Choosing a homebirth wasn't just about my comfort or health, it was for her as well. Taking that into consideration, I would definitely choose a homebirth again.