My worst roommate experience ever (Chapter 2 of 3)

So here I was, with an open room for rent, having a baby soon, and really needing someone who could be trustworthy and maybe even helpful in the coming year. CM was in a dangerous place and needed a safe place to stay, but didn't have much money for a deposit.

I told him he could move in and pay the deposit in installments, and that I would be able to discount the rent if he helped out around the house to balance it out. And he needed to keep things clean this time. At first he seemed ready to actually put forward some effort. He always washed pots and dishes as he used them. He also was saying he wanted to go to a gym, he wanted to save money and move to the mainland with his new long distance BF, etc. He was working full time in the next city but now there were plenty of similar jobs to be had within 15 minutes of his front door. Things seemed to be looking up for him.

Unfortunately, he didn't keep that momentum.

He never "helped out."

For the first six months he lived with us, I know for certain that he never touched the vacuum or other cleaning supplies I had provided for his use. I reminded him that he needed to clean regularly and asked him to help keep the common areas clean, and renewed his lease at the same rent.

For the next six months, he still refused to lift a finger.
Just a couple of weeks after Kairu was born, Yasushi was sick with pneumonia. I was recovering from birth, taking care of a newborn, a 4 year old, and my sick husband. He knew and just avoided us and ignored us, and never even offered to help cook or clean.

I became unable to keep up with regular cleaning for a few months and when I finally did get time to clean the kitchen and bathroom again, I noticed the areas where he was keeping his things had obviously not been cleaned since before he moved in. His side of the bathroom counter was covered in thick black dust. When I asked him to keep his side of the bathroom counter clean, he wiped it -once- with a washcloth and bleach and left the dirty wet cloth right there on the counter for me to find later, and proceeded to not do it again for the rest of the time he was there.

The toilet was also a constant struggle to keep clean, as he was the only one in the house who seemed to have explosive, loose bowel movements several times a day and left evidence all over the shared toilet. In a house with two small children. I asked him several times and even texted him photos, but still I found myself cleaning up splattered feces from the toilet seat almost daily. Yasushi revealed to me later that he had been cleaning it sometimes as well. 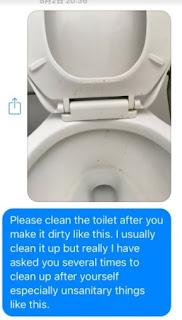 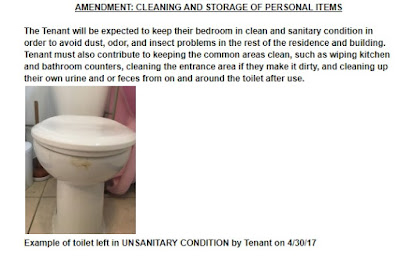 And then there was the smell. Every day, CM would come home from work in desperate need of a shower. And then just...not shower. Within a year the bedroom, namely the mattress, had started to take on a distinct odor. I asked him a few times to clean and deodorize the room. His response was to complain that he had already thrown out all of his food and taken out the trash and done the laundry so he didn't know what the smell was. But the smell was just getting worse. I began to wonder if he was actually washing his body in the shower, because he seemed to still smell after he had taken his morning shower. Maybe his clothes smelled from being stored in the room. Either way, I'm surprised he never got complaints at his workplace from it. I certainly would notice if I were a customer of his.

Anyway, the next lease period, I raised the rent appropriately to bring it back up to average market value and to cover my time and labor cleaning up after him. I gave him a warning to take care of his hygiene or I would have to ask him to leave. 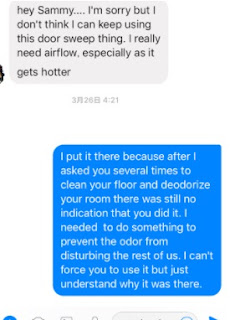 There was no improvement. Eventually, the smell had gotten so bad I had to put one of these door draft thing under the door to keep that nasty odor form permeating the entire home. It worked pretty well, until he started complaining that he needed air circulation because it was too hot and leaving his door open on his days off. The smell was unbearable. I was putting odor absorbers outside his door and spraying Febreze whenever he walked through a room because the smell followed him and stayed in the air after he left. I was constantly running the kitchen fan, propping the front door and lanai doors open, and generally putting in a lot of effort to keep my house smelling not disgusting.

At some point, CM decided that spraying half a can of drugstore "axe man spice smell" deodorant/body spray on him every morning was a great solution to his body odor problems. Even though he was spraying it in the closed bathroom (which the can specifically says not to do), the fumes would fill the whole house and anyone in the living room or bedroom, especially my not even 1 year old son, would start coughing uncontrollably and need to go to the lanai for fresh air. When I confronted him about the fact that he was bringing harm to me and my children, he made some excuse about other ways of controlling body odor being "too expensive" (even though water is free and unlimited here) and complied for a few months or so before doing it again.

At this point, I started to seriously consider ending the lease or converting to a month to month and searching for a new roommate. I warned CM of this as well. Yasushi convinced me to renew the lease one more time with the argument "At least he keeps to himself, doesn't make trouble and he pays every month." I reluctantly gave him one last chance. I rewrote the lease with very clear, specific instructions and warnings on where to put his personal items and his obligation to not create a health hazard for our family.

And then in September, he didn't pay the rent until the 4th week of the month. He was usually late on the rent every month, always had some excuse, never tried to budget or change jobs or get a 2nd job despite how many opportunities there were right in front of him, but usually he paid sometime during the 2nd week of the month. But now for some reason he seemed to think not paying for almost an entire month would be acceptable.

When I finally received the rent, I told him I would not be renewing the lease, and wrote up a set of move-out guidelines that clearly explained and outlined how to clean the room upon move out. As always, the guidelines were fair, reasonable and a bit generous. I simply asked that the room be free of all trash, personal belongings, and the surfaces wiped/sweeped/deodorized, which is considered standard for any rental property. I even gave him a grace period to have everything moved out and clean by November 3rd, remembering how he had overstayed previously.

He moved about half of his things out on October 30th and went to stay there that night, and told me he would be coming back on the 1st with a truck for the larger items, leaving a pile of large boxes and things in our entrance before he left. Since he wasn't coming back for 2 days and I needed to use the front door daily, I had to move them back to his room.

He came back for the rest of his furniture and things on November 1st. He gave Yasushi the key and practically ran out the door while I was bathing the kids, mumbling something about giving us shelves and a fan to use.

We approached the closed door with dread.

Even though it was in my full legal capacity to do so, I never did mid-lease/between lease inspections of the room. We had not seen the actual state of the room save for a glimpse or two when he opened the door. Whenever we did get a glance, we only saw that the room was filled with furniture, boxes, trash bags, piles of clothes, and so much clutter that you could not see the floor. And the overpowering smell gave us a pretty clear warning that the room had been very poorly maintained.

Another clue as to the state of the room was the state of CM himself. Over the two years he stayed here, he was in increasingly poor health. He could barely walk. His legs were always swollen, red and blotchy and he had to wear compression bandages for some kind of vascular issues he had. If he was standing up in the kitchen for a few minutes, he would already be out of breath. After walking the 5 minutes (10-15 minutes for him) from the nearest bus stop after work, he would come in gasping for breath like he had just been running for miles. He could barely carry even small, light packages and bags, and seemed unable to bend down or squat. He barely slept between his loud choking snoring and getting up multiple times at night to use the bathroom, and always seemed tired and grumpy. And when he was in his room, he always seemed to be constantly coughing and sneezing.

Some say I should have been a bit more proactive in trying to help him improve his lifestyle and health, but any suggestion I made was taken as an attack, and I was "fat shaming" or "job shaming" or "poor shaming", no kind of advice or constructive criticism, and no matter how far down he went, nothing seemed to make him want to improve his situation. He even seemed resentful of me and my family and our healthy, active lifestyles. When he came out of his room and I was stretching/doing squats before my morning bike ride, cleaning the floor, eating a healthy meal with the kids, coming home with my son on my back and carrying 10-15lbs of groceries, etc., even just watching a TV show I like that happens to feature healthy food or exercise, he always would look away frowning or sigh and pout.

I was just keeping a small hope that since he is in his 30's now, maybe he would start taking responsibility for his life and start working on his physical and mental health, but in the end it seems like he chose to stay on his downward spiral.

What we saw in the room was not just shocking and disgusting, but also pretty sad.