My worst roommate experience ever (Chapter 3)

We opened the door and were immediately overpowered by the stench, dust, and what we later found was mold. Yasushi could only be in the room for maybe a minute before he was coughing and sneezing, much like CM had been but worse since he wasn't used to it. I didn't last much longer than him and we both felt sick for the rest of the night.

What we saw upon walking in was a full trash can, trash and debris on the floor, every surface covered in thick dust, stains all over the floors and walls, and the room filled with miscellaneous objects that we never asked for nor needed. The fan and shelves he "gave" us were completely covered in dirt and dust. Warning: the pictures are kind of disgusting. 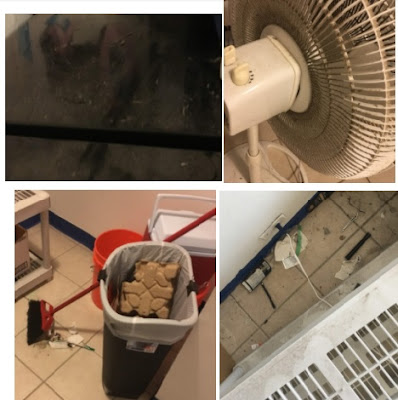 I texted CM after this, telling him that the room was making us feel sick, and warning him that it was very likely he wouldn't be getting his deposit back after leaving the room in such a state. He could have offered to help clean since it was still within the grace period, and he could have at least apologized. Obviously he was not concerned with our health, or his money.

The day after was Thursday and while the kids were at school, I went and prepared myself with gloves, masks, and lots of plastic, additional disposable cleaning materials, bleach, and Odoban, and started the massive task of cleaning CM’s mess.

The most shocking part was definitely the bed and mattress. My suspicions that it was likely the main source of the smell were unfortunately spot on. The mattress was originally a light gray but when I removed the stained, smelly bedsheets the entire mattress had turned a brownish shade as well as the pillow that had been left. There were spots of blood on the mattress as well. The underside had mold spots on it. It was a total loss and I quickly wrapped it in plastic to dispose of it so I could clean the dust and mold that had accumulated on the wooden bed frame as well. 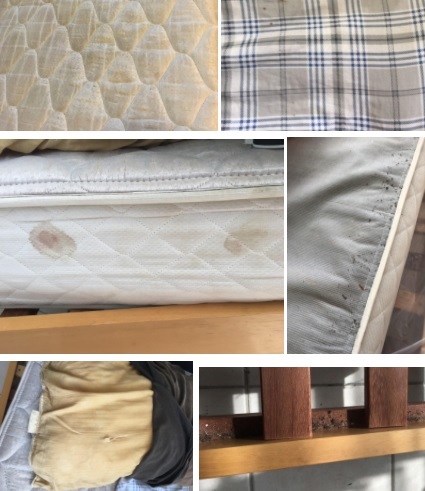 I moved the bed frame away from the wall and found brown liquid stains all over the wall behind it. The floor below the bed was covered in trash. Magazines, papers, underwear, socks, pencils, paintbrushes, and even loose change. Not just dirty, but wasteful too. 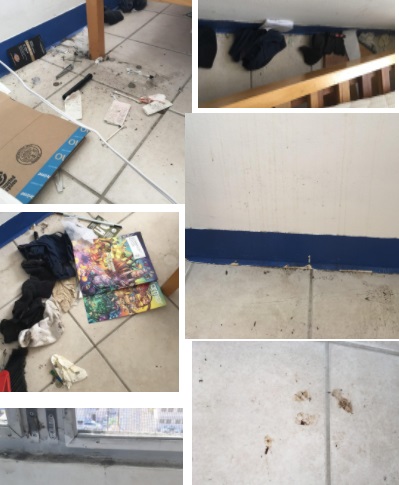 Not only did I need to clean the room and original furniture that I put in there, I then had to go through and salvage/clean/toss all of the junk that CM left.

The fan was operational, but I needed to take it completely apart including the casing around the motor as there was actually a lot of dust in there as well, which is actually a fire hazard. I was pretty shocked to discover that since he usually ran it constantly even when he was out, and we had a huge 7 alarm fire in another condo building in our neighborhood just a few months ago, so it hit pretty close to home to think someone was willingly putting us in danger through their neglect. But after I cleaned it thoroughly and dried it, it was just like new again.
There were cooler boxes that had water, mold, dirty tupperware and various stains/filth inside, a small suitcase that was smelly and caked in dust as well, a broken folding cart, a fluorescent light bulb that didn't fit in anything in our house, a broom and dustpan that seemed to just kick up more dust and dirt than it cleaned, and a stack of Home Depot cardboard boxes. Most of it went down to the dumpster, it could not be saved or used and we needed to get the room clean.
The shelves he left there were filthy, and for some reason there were 3 additional shelves but no kind of hardware or anything to use them, so more stuff for me to take down to the dumpster because he was too lazy.
Curiously there was a mop and bucket set completely brand new in the box with the tape never even broken. The box was covered in dust which suggested it had been there unused for quite some time. I can't really understand why, because he always had cleaning supplies outside his door ready to use provided by us, he always complained he didn't have enough money (the set costs $40 new) and then it was never even used despite me asking him to clean several times.

Anyway, after a week or so of daily cleaning, 4-5 dumpster runs, and researching and employing industrial nursing home grade deodorizing methods, the room was finally restored to its previous clean condition.

Our home was finally cleared of CM’s odor and negative energy. As we made arrangements with our new roommate who moved in less than two weeks later, I felt a definite shift and my home felt refreshed and relaxed again.

They say everything happens for a reason. Maybe this experience, while unpleasant, was a way to motivate me even more to maintain my health, reach my personal goals and strive for the happiness of my family. It's just such a shame that someone would choose sickness and hardship when they have so many opportunities to turn things around and people who would support them if they needed it. There are many who would love to be in that position and who pull themselves up despite not having the abundant resources so many of us let go to waste.

So I'm not going to let this lesson go to waste, for me or for my children. Take care of yourself, take responsibility for the effect your actions may have on others, and always, always, keep trying to do something BETTER.


Update…
CM has contacted me twice; to tell me his address so I could send the deposit
(the whole TEN dollars left after all the time and money I needed to clean up the mess he left)
and to tell me to stop stalking his Twitter and leave him alone. He gave no apologies or explanations
for breaking his promises to us and having us risk our health and use our time (and his money)
to clean up what he did to our property.
Yes I have looked at his Twitter while writing all of this.
I was looking for any kind of information he offered about his health, education, work, and living
situations. He has blocked me on all social media channels so I only can see what he has made
available for public viewing. However he seems to have this idea that I have been constantly being
passive aggressive and writing things about him, which is not true. But I guess when you've spent
over a decade being a perpetual victim, blaming everyone else for your own poor choices, you
become a bit paranoid as well. Very sad and another major indicator that he really should have
started being proactive in seeking professional help and starting a healthier lifestyle a while ago.
It's still not too late but the farther down he goes the harder it will be to come back up….if he can
come up.
He has told me to never contact him again, and I have no reason to after this; I have cleaned up his
mess, and finished our transactions, and I have not been contacting him in any way other than what
was necessary to do so. But someday if he really does want to live a better life and does actually
want help and support I will still leave my channels of communication open to him, as I do with all the
difficult people I encounter in my journey. Ultimately, it is all up to him whether he wants to be happy
or not.