Great memories of 2014- Home for the holidays.

The holiday season has officially started, and for the first time in a long time, I feel like I am truly home for the holidays. Things are falling into place and I feel more and more relaxed. And there is also the fact that the holidays are just so, so much fun!!!

First, there was Halloween. 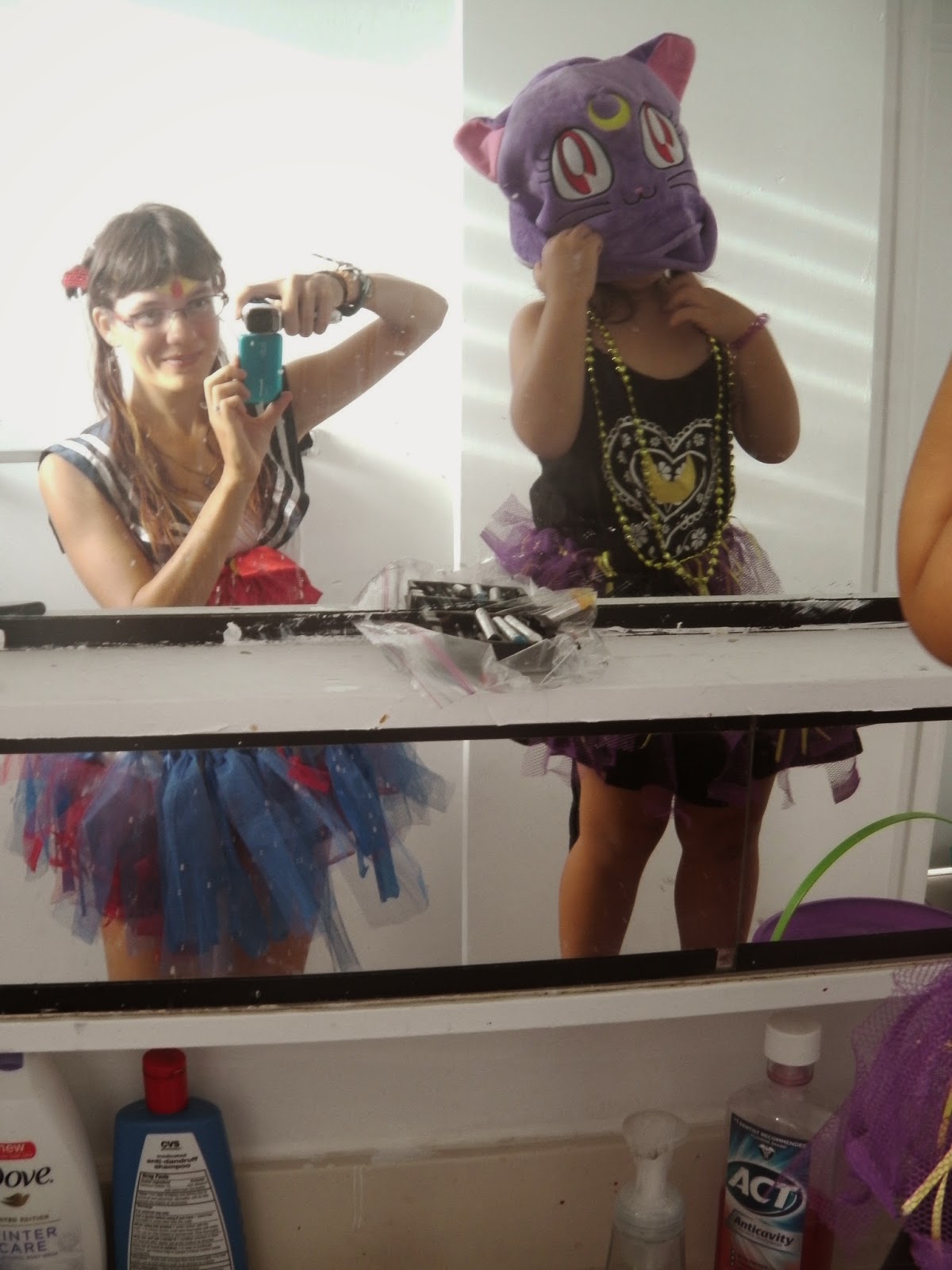 Chinami's first Halloween, she was just under 5mos and we sat outside our complex and handed out candy,  her in a leopard print diaper and me in a matching dress with ears and makeup. Her second Halloween, we were dressed up, her as a little angel and me as a devil, however we couldn't go anywhere because she had chicken pox (which, in true Chinami fashion, she got over in a few days with no complaint.) So this year, I was determined to show her how fun this day could be. I had started watching Sailor Moon with her as hulu was streaming both the original series (remastered!) and the remake, Sailor Moon Crystal. She really took to it, and now loves to sing along and do the various poses and catchphrases! (yay, more Japanese influence!) 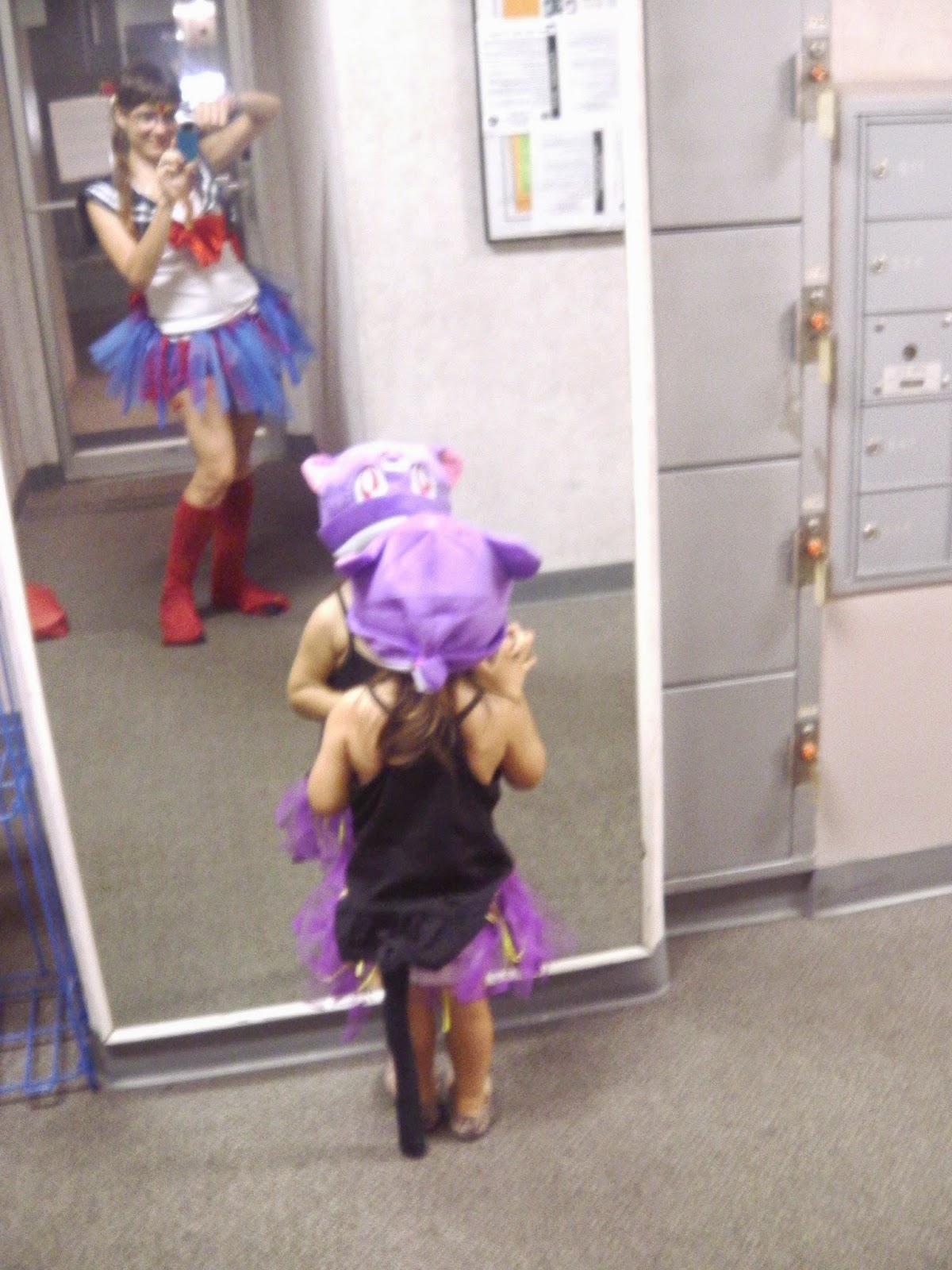 So this year I decided I would be Sailor Moon, and she would be Luna, as she loves cats and the color purple, I could make her a costume she would really be comfortable in. (Toddlers don't usually do well with costumes with lots of accessories and complex hairstyles) So, working on a budget, I bought a Sailor Moon lingerie set, and a purple Luna hat, and went to the thrift stores and raided my closet and scraps bag for a white tank, blue shorts, red sleeves to make "boots" and then went to the craft store and bought netting, ribbons and plastic tablecloths in several colors and made tutus. A red one and a blue one for me, and a purple one with yellow ribbons interspersed for Chinami, and attached a black tail to hers. I made a crescent shape for Chinami's shirt and a tiara for myself from yellow duct tape. Chinami wore a black or purple dress, as she wore hers several times. We had trick-or-treating at our local shopping center the Saturday before Thanksgiving, and then a party at a dear friend (our doula who helped me when I gave birth to Chinami) 's house with an unexpected detour through the "Hallowbaloo" block party in Chinatown. Then on the day of Halloween, we went to Ala Moana Center for trick-or-treating. My original plan was to go to Ala Moana, then Ward, then Hilton Hawaiian  Village. However, I underestimated the crowds and decided to keep it simple for Chinami, so after a dinner break at Subway (I had a BOGO free coupon for 6 inch sandwiches) we headed over to Hilton for the tail end of their trick-or-treating (Honolulu Cookie Company FTW) then walked through the Hilton, admiring the  Friday night luau show as we headed over to the Great Lawn for fireworks and an outdoor showing of the Charlie Brown Halloween special. As we waited for the movie to start, Chinami decided to go around to all the other families there and show off her costume. She was so proud of herself, so friendly and so much confidence! As we watched the movie, we snacked on some of the candy we had gotten, and then walked home, going to sleep past 9 pm. Safe to say it was the best Halloween both of us had had in years!

Then in November, there was another important event for our family. We finally rented out our 2nd bedroom to a lovely young couple who are honest, courteous and Chinami loves them! So our household went from 3 people to 5! It's so nice to have extra people in the house. They watch Chinami once a week or so and it's such a great help to have them around! 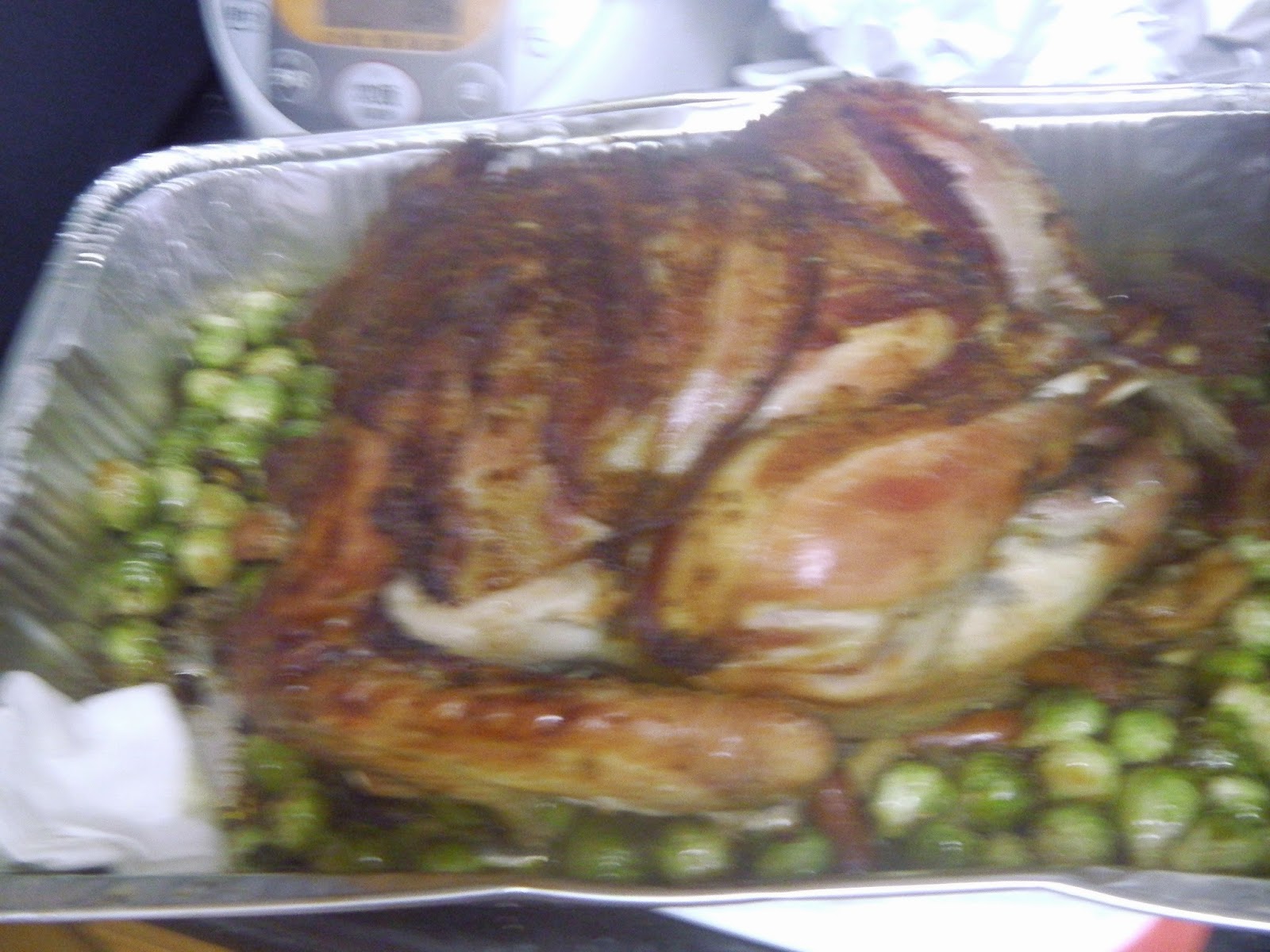 So because of that, for Thanksgiving, not only did we have a lot of delicious food, we had more people to share it with! We had our roommates, their friend, and a friend of a friend of ours who was staying in Hawaii over for dinner, a total of 6 adults and Chinami. 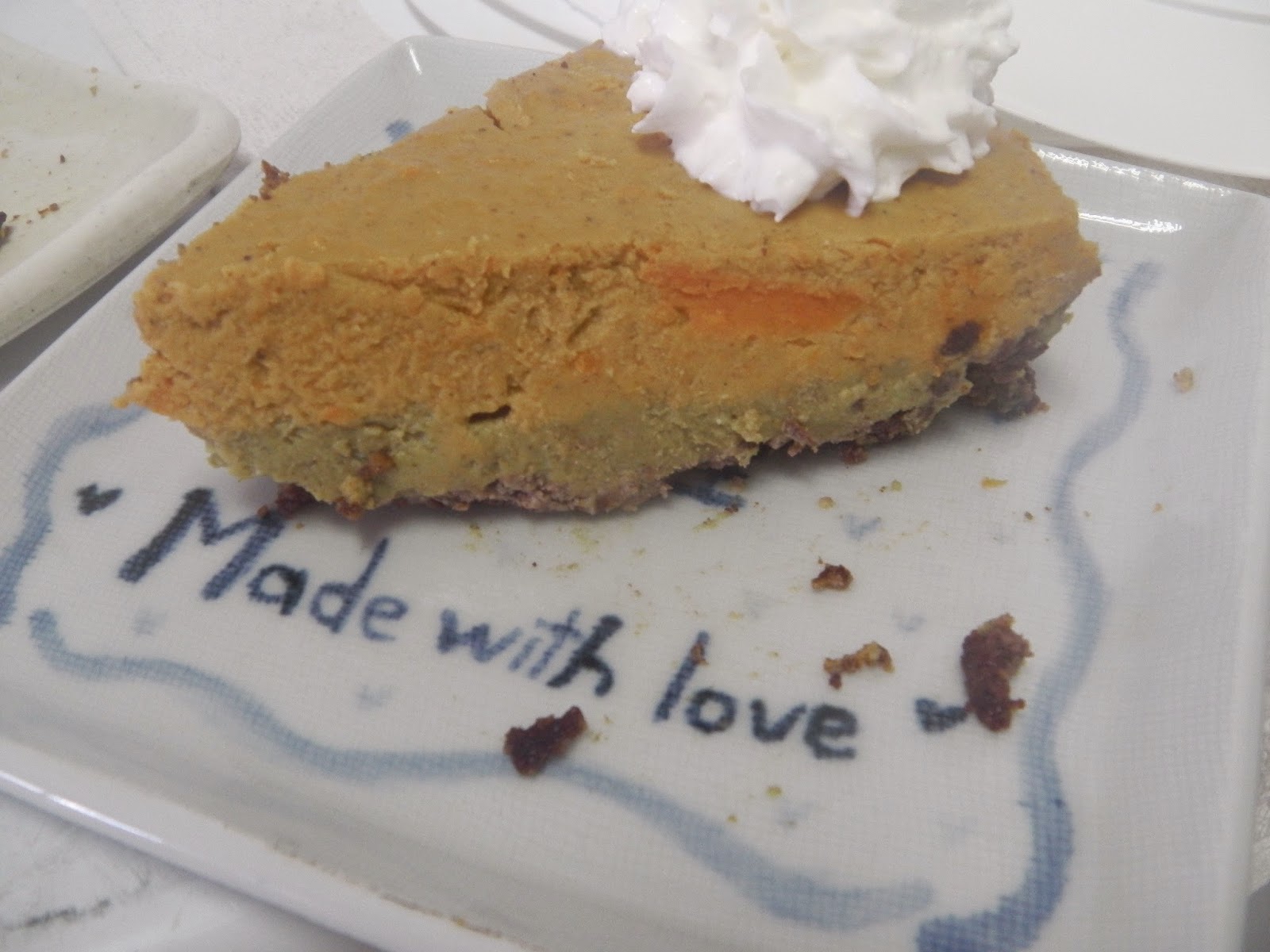 The dinner itself was decadent-a turkey stuffed with onion, garlic, lil' smokies sausages and loaded with bacon on top with brussels sprouts thrown in the pan near the end, my wild rice and quinoa "stuffing" made with chicken broth and vegetables in the rice cooker, and my kabocha/sweet potato pie, and a salad, and we had some mashed potatoes with gravy, a spicy broccoli casserole, and fried rice contributed for a delicious spread.
The day after Thanksgiving, Chinami and I made some sandwiches with leftover sliced turkey breast, salad, and an avocado, and took a picnic dinner to Waikiki and ate under the stars before watching the Waikiki Holiday Parade. After the parade was over, we zipped over to the beach to watch the Friday Night Fireworks. The holiday season was officially here and I was so ready for it! 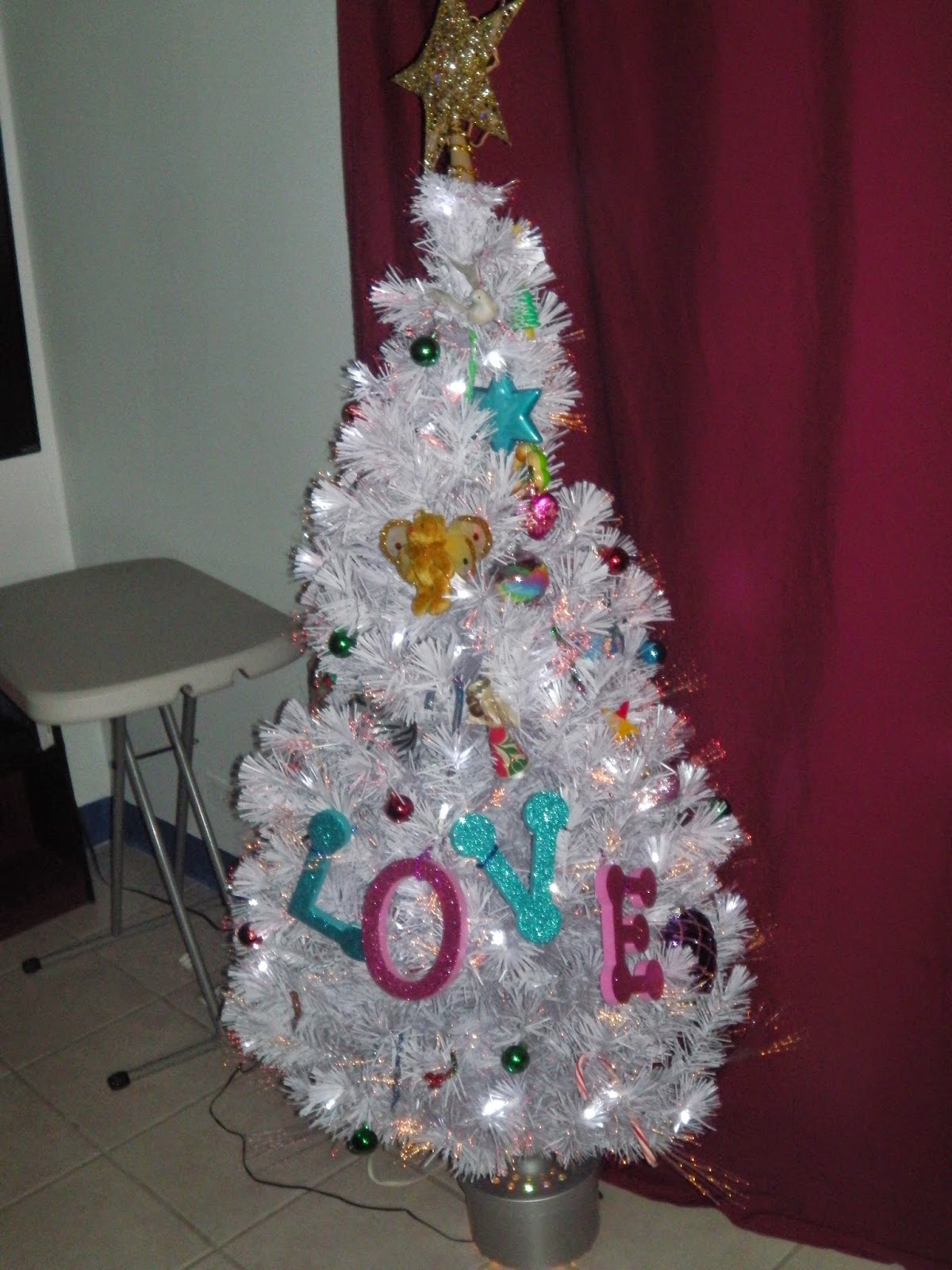 
Then on Christmas Day, after I played Santa and delivered tiny bottles of homemade mulled wine to my coworker's desks, Chinami and I watched Christmas movies and ate cookies, red and green pancakes, and made a "gingerbread house" out of cinnamon sugar Pop-tarts, graham crackers, and red cookie icing with marshmallow fluff. When Yasushi woke up, we opened presents, and went out to a Christmas brunch at the Willows Restaurant, which was delicious.
After that, Yasushi had to go to work, and Chinami and I spent the rest of the day at home, enjoying her Christmas presents and the food coma. 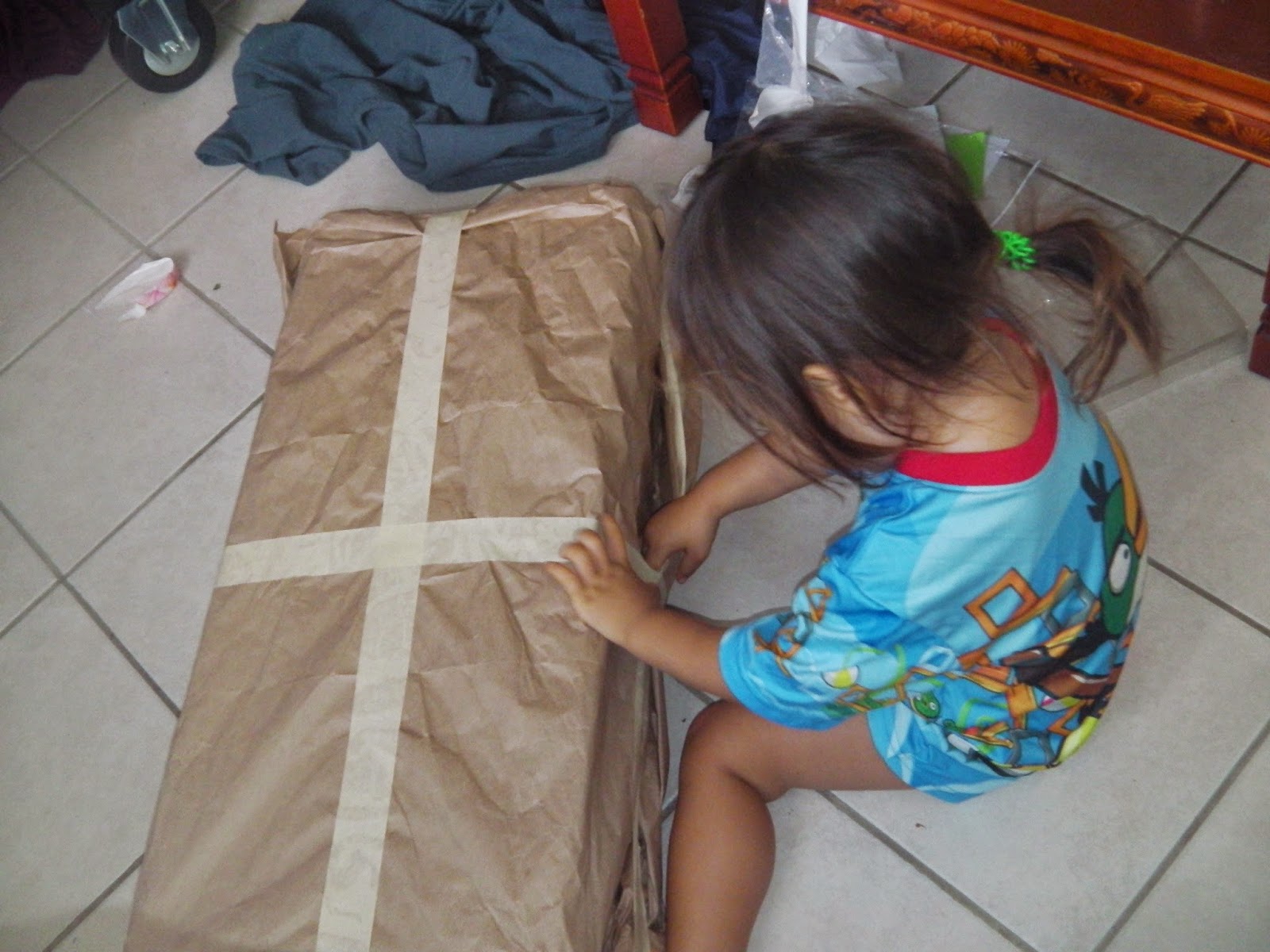 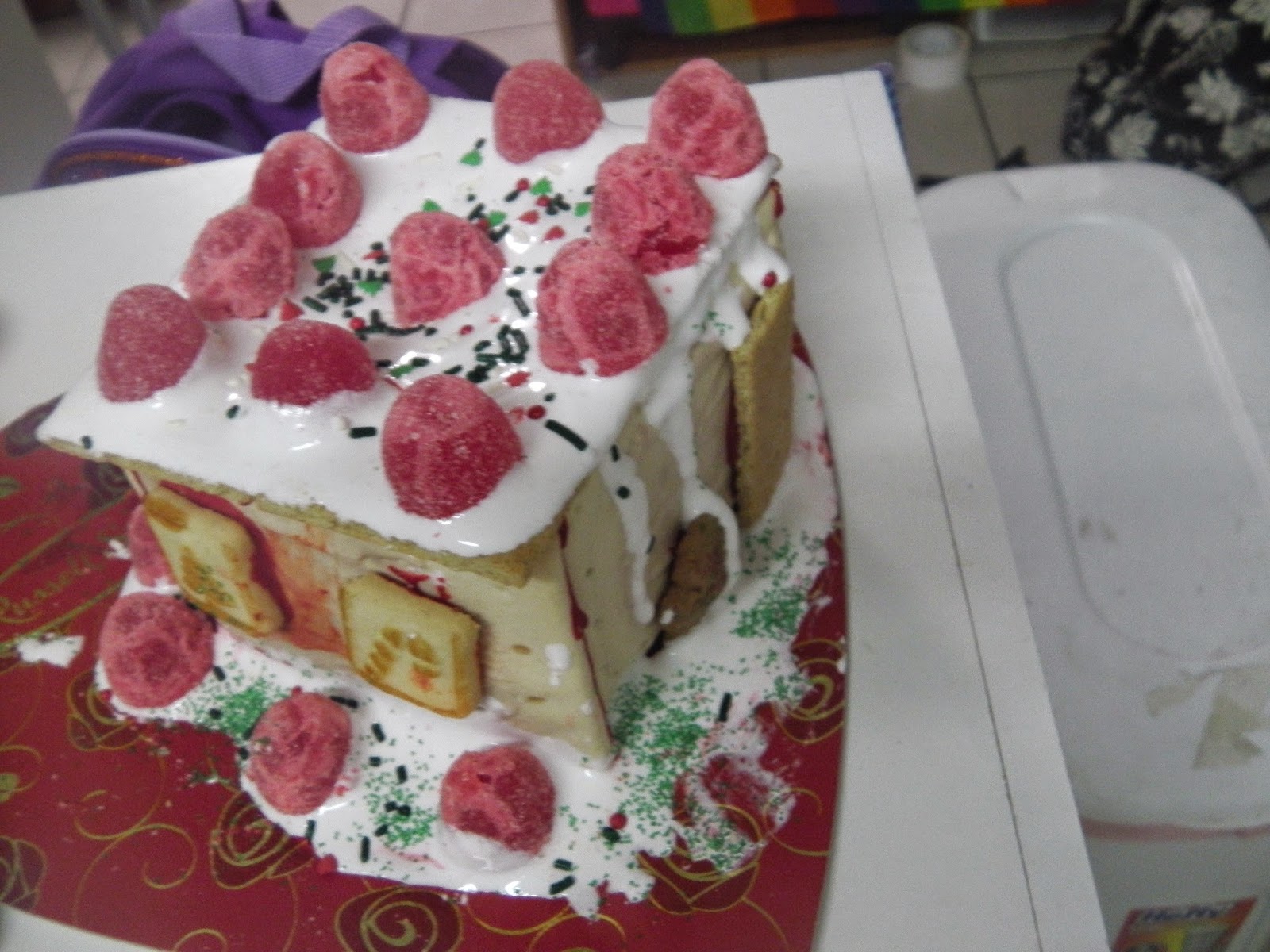 Every year, the McCully Shopping Center runs a free "holiday trolley" that goes on a loop ride through the Downtown area to see the Christmas displays there and at the Capitol and Honolulu Hale. It's a fun event, a guide/MC hosts and we sing carols and he makes jokes. However, it's very popular due to the reasonable price and convenient starting/drop off point., and there are only a few days a year they run it. So we went before Christmas but were too late to get any tickets for rides before 7:45. Our last chance was a couple days after Christmas, we went and it was the same deal, all of them were full until the 7:45 ride. So, rather than miss out, I took the tickets, and we went up to Long's and the park to kill time. Long's was getting rid of all their Christmas stuff so we scored some super-cheap ornaments, and a singing elf hat and a Nutcracker which Chinami loved as we had watched the movie version of the Nutcracker Ballet together. We enjoyed our trolley ride and again, went straight to bed afterwards. 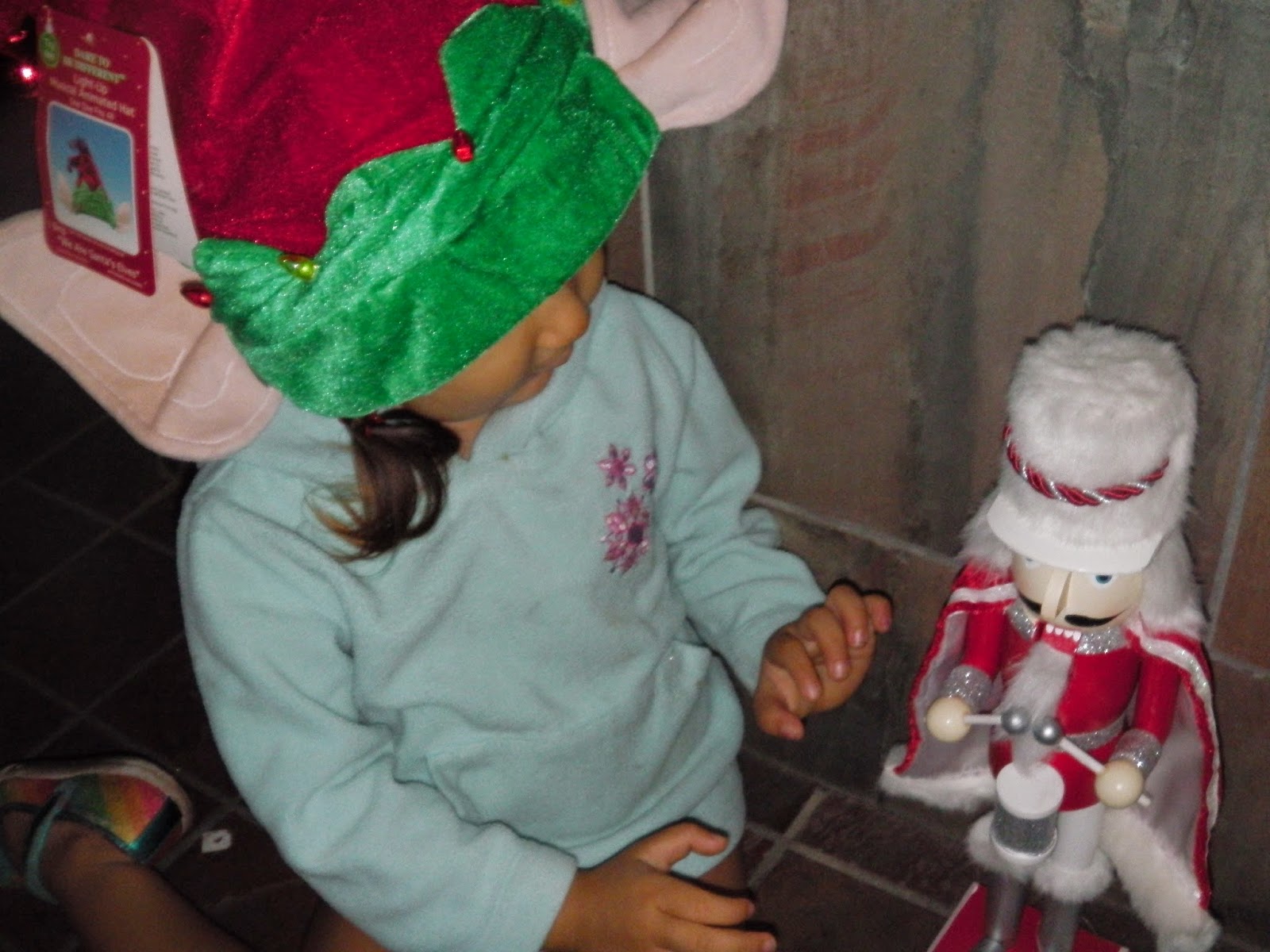 New Year's Eve, unfortunately due to Chinami's lack of staying power and my work schedule, we had to turn in early again. We went to Hilton Hawaiian Village again to watch "Frozen" and went straight home to bed afterwards. I woke up briefly at midnight and Yasushi came home, and we watched the fireworks from our bedroom window. We could see parts of both the Waikiki and Kakaako displays along with several amateur displays as well. It was a pretty magical way to say goodbye to 2014.

And then, it was 2015. New Year's Day, I worked, which meant I had to miss the Gagaku New Year Celebration, but since I was lucky enough to have been able to spend Thanksgiving and Christmas with my family this year, I couldn't really complain that much. Plus, on New Year's day, being a Japanese company, we shared a celebratory drink and had delicious lunchboxes for everyone, which was a really nice perk and I was glad to be able to share in that. 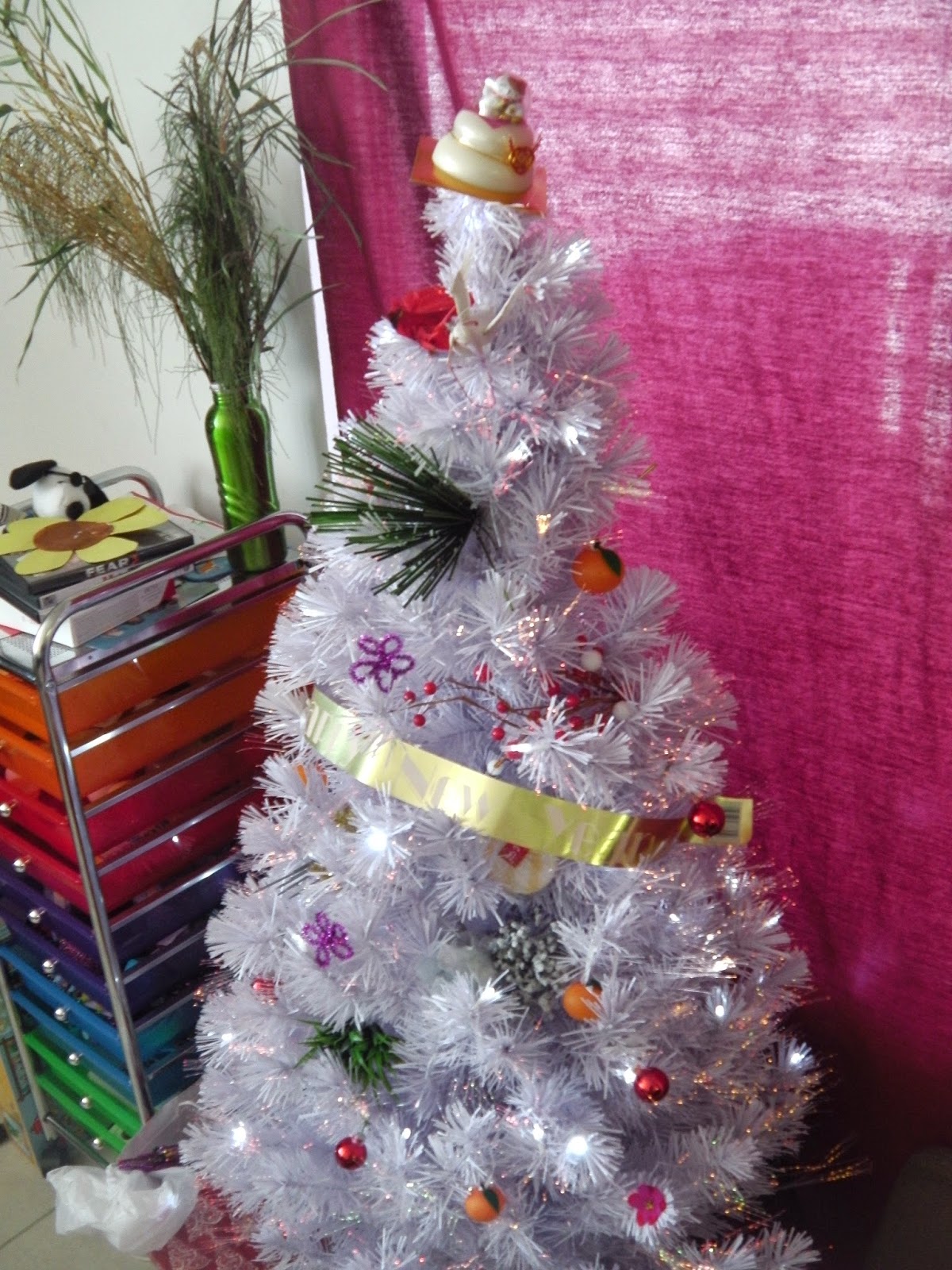 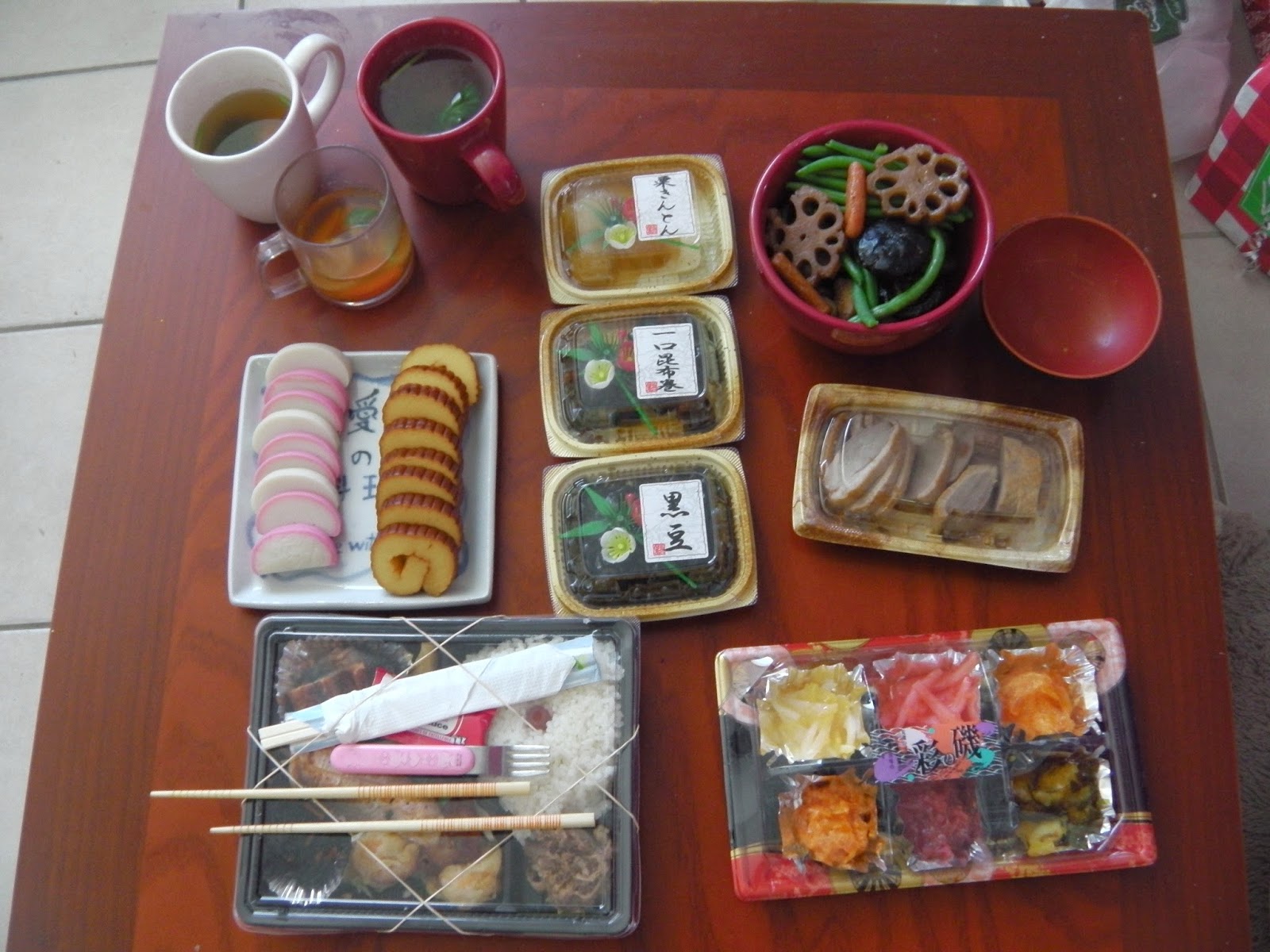 Our Christmas tree was temporarily made over into a New Year's tree, adorned with bamboo, plum, mandarin orange, and red and white themed ornaments, and we enjoyed my bento from work along with an assortment of traditional goods bought from our local Japanese market down the street, and mochi soup and stewed vegetables I made, in the afternoon after I got home from work.
I tried to watch the first sunrise of the New Year while at work from the airport, but because of the clouds the sun didn't actually come out until almost 8 am! However, I usually watch the sunrise on the way to my 2nd job- working at the honey stand at KCC Farmer's Market a few Saturdays per month. Compared to my regular job, I can sleep in a few hours or so, and still leave with enough time to take the longer, more exerting, more scenic route riding my bicycle around Diamond Head, taking a break at the lookout point to get a perfect view of the sun rising. The first sunrise I saw there this year didn't disappoint. 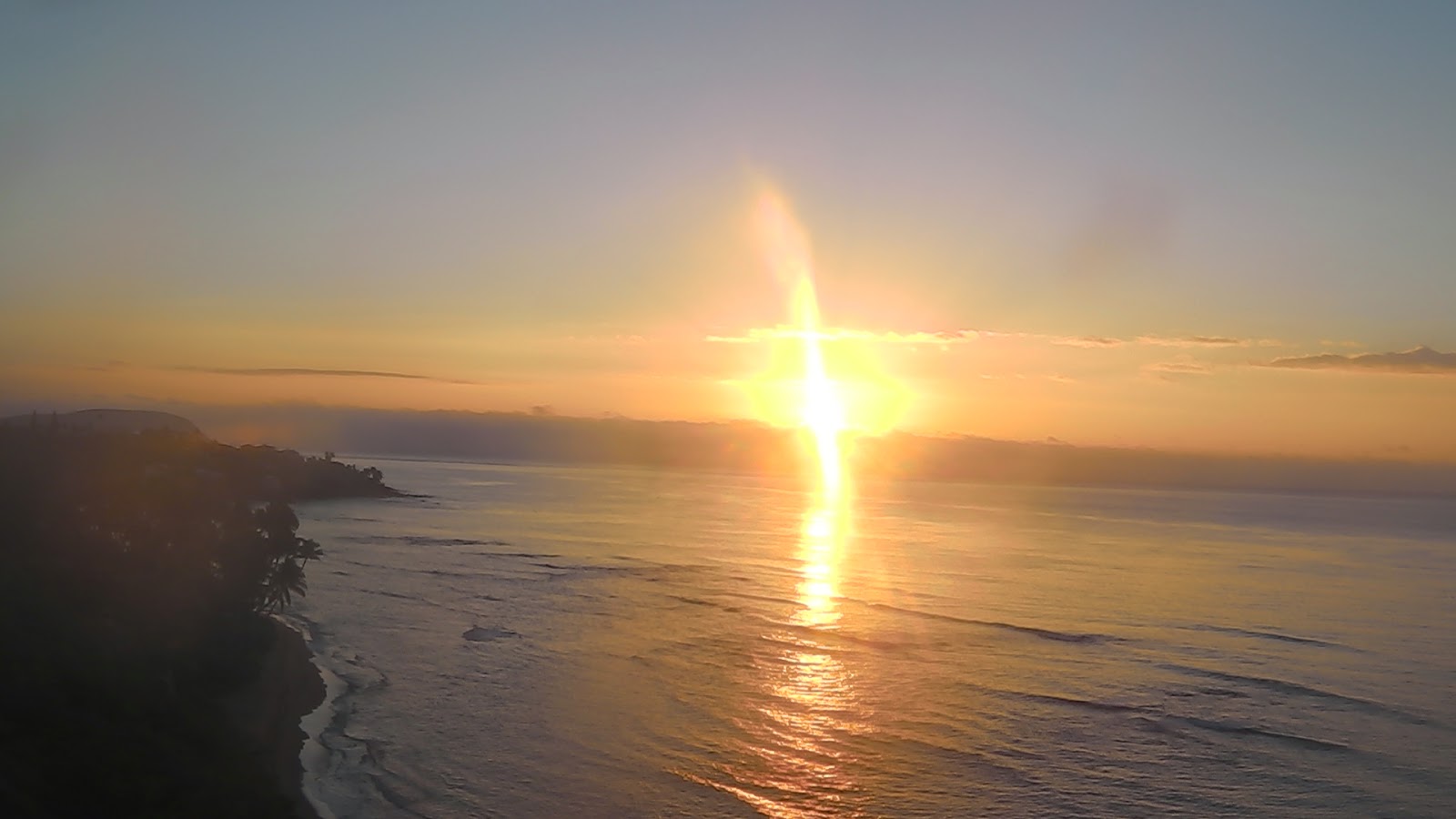 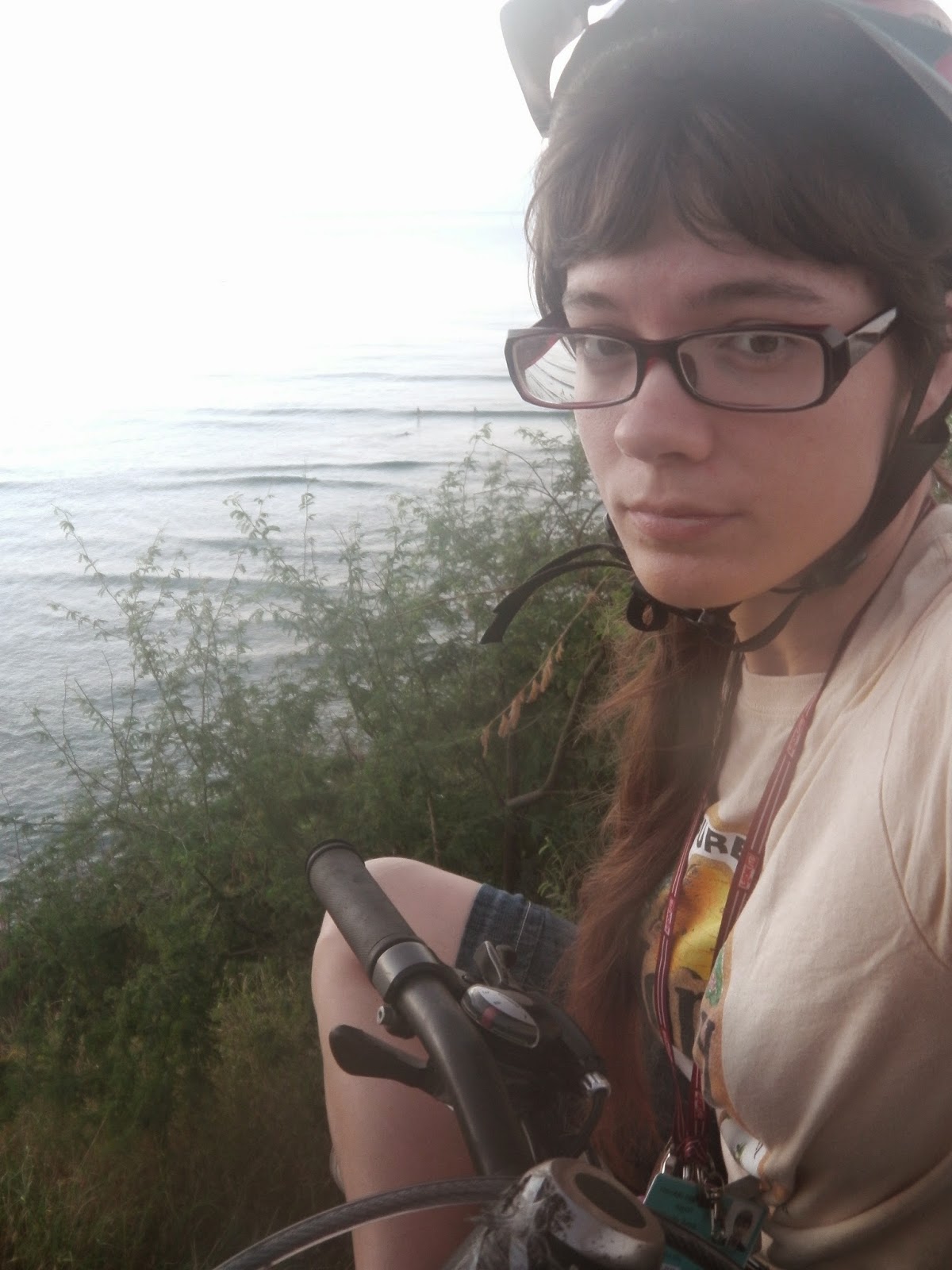 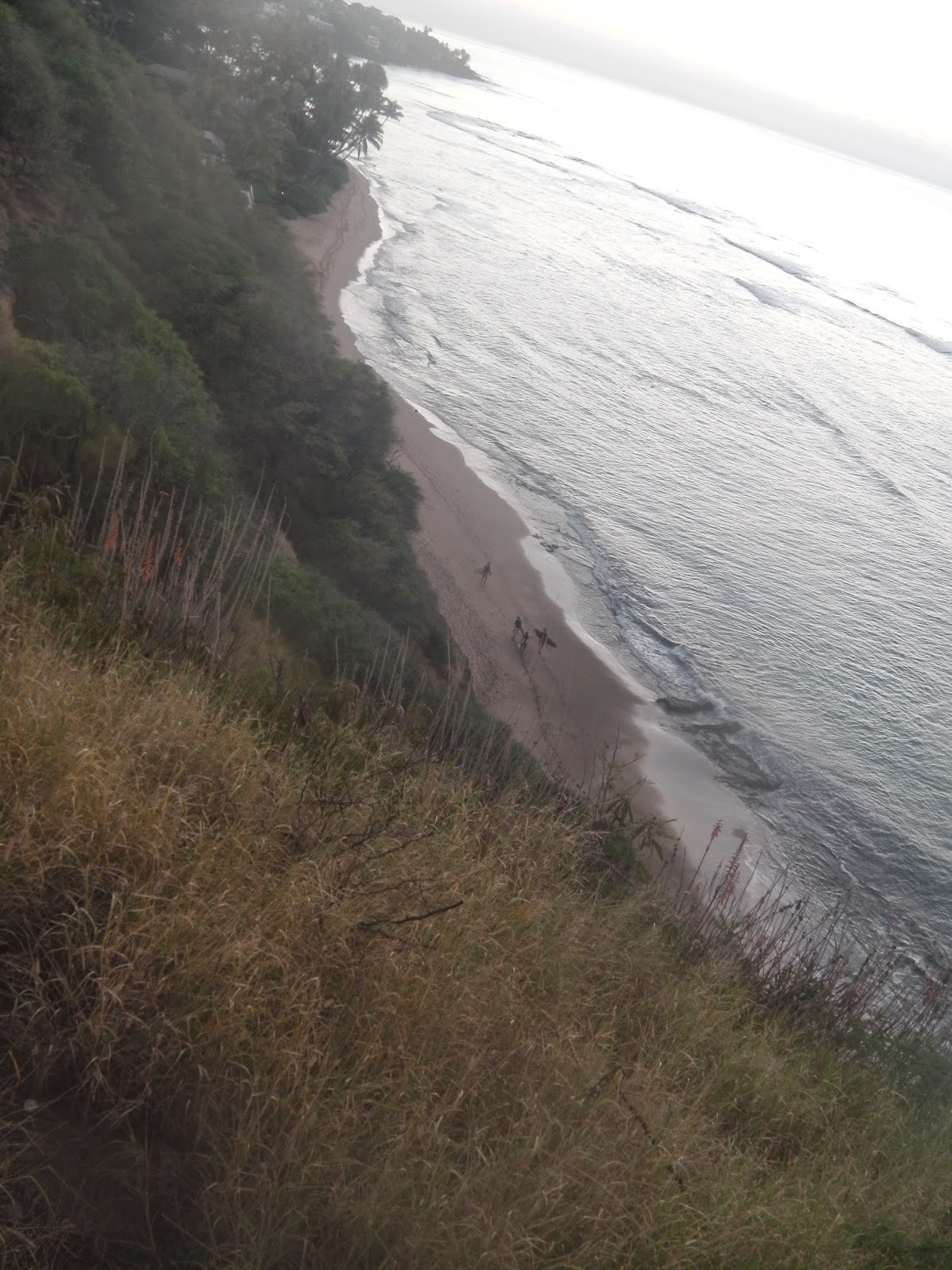 Having CPTSD means that not every day is going to be a good one, I accept that. But I can only hope that 2015 holds some good days like these.
Posted by Sammi at 11:47