Life as a family of 4, one week in

After Kairu was born, we all slipped into our family bed, a queen mattress and a twin placed on the floor, and for the first week each day Chinami has woken up with a smile and immediately started to kiss and talk to her little brother. Co-sleeping means I have gotten plenty of sleep at night as well, despite always waking up once at 3AM out of habit due to my work hours.
My milk came in like clockwork again on the third day, except this time I didn't get engorged. Maybe because Kairu drinks so much or maybe it's because my body remembers what it was doing up until last year. It remembers more than Chinami, because she did ask to nurse once, and found out she had forgotten how to latch. Poor girl. Maybe when I start pumping I will give her some.
I have been given strict orders to relax and move as little as possible this time around by my doula, and also by my midwife because in her words 'you just birthed a 9lb baby!!'. Luckily, this time around, Yasushi and I are in a much better place, literally and figuratively.
When Chinami was born, we were in a ground level shoebox studio apartment with no wind circulation in the middle of summer, we were in-between insurances, and Yasushi was working at a place at which him working for 16+ hours a day with little to no extra compensation on top of his normal salary was considered perfectly okay, and they were so generous to give him 3 days off, because one of the days was his regular day off. On top of that, I had my mentally unstable mother threatening to sue us and deliberately putting us in danger by posting our address on a public Twitter account.
Now, we own our home, a modest 2 bedroom condo on the 8th floor with plenty of breeze in a secured building, we both have stable jobs, insurance, and support systems, plus a roommate. My parents have not contacted me in 3 years, and have expressed no desire to make amends or meet their only grandchildren....their loss. Yasushi got a full week off work, no begging required. Yasushi had his own health problems during the week off but I was still blessed to have him here helping with Chinami and cooking us meals. Chinami also went to her auntie's a couple times, and to preschool as well during this week so she was still able to get outside and socialize.
However, for me, rest means not going outside. Only yesterday, one week after giving birth, I finally went outside, first downstairs to the pool to sit on the deck while Chinami swam around, and then we went to dinner at Yasushi's restaurant later in the day. Since I am usually out of the house at least once a day, every day, either working 1 job, 2 jobs, or taking Chinami to various events, playgroups, etc. it was a bit of a shock to have to spend a whole week inside the house, and not even able to vacuum, do laundry, or any of the other things I usually do when I am 'in' for a day.
So today I did listen to orders and rest most of the day, except when I walked to Chinami's preschool to pick her up. Kairu was with me of course, in his favorite place, my Baby K'tan.
My postpartum tummy is still pretty big and soft, just like last time, but even though I gained 50+ lbs this pregnancy, I am already down 25. They say it takes 9 months to grow and 9 months to shrink, but at the rate Kairu is nursing, it looks like it will be around 4 months....again. 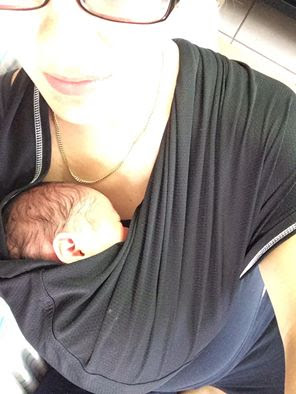