The story starts around midnight on March 16...I woke up as usual and went to the bathroom, and went back to bed. I was having some sporadic contractions but thought maybe they were just more Braxton-Hicks. Over the next 2 hours or so, they came in 20 minutes, 10, 15, and finally started coming around 5-7 minutes apart. But they were not so strong, so I just gave my midwife and doula a heads up that things may be starting, and I tried to eat, drink, and sleep between the contractions until the sun came up. Chinami woke up and we watched Big Hero 6 together and even made a little cake from pancake mix+bananas, etc. in case she wanted to sing Happy Birthday to Kairu when he was born. The contractions tapered off slightly while we did this and I kept my midwife and doula updated, and my midwife said she would stop by after she taught her Wednesday classes close by, around noon or so. I still tried to relax, and keep drinking and eating small things here and there. I noticed when I did get up and move around, things got a little more intense and I would cramp in between contractions, but still nothing I couldn't get through with a little breathing and my hot water bottle. When Chinami was born, my water broke well before my labor actually started so we were on a time crunch and going hiking, walking, bouncing on birth balls, etc. to get the contractions going. So this time I was definitely grateful to be able to have the gradual buildup to get myself and my birth team prepared and rested as much as possible.

My midwife came and assessed that I was still in a place where it could pick up or slow down and he might not be born until after sunset, at least. So I told her to go home as we would all need our rest. My doula called a little later and the contractions were starting to get a little more intense, but I was still able to handle them although I was starting to stop and vocalize through them. Not an hour after I got off the phone they started to pick up even more, and when I couldn't speak through a long one, Yasushi called my doula back (she speaks Japanese) and asked her to come. I went back to the bed to labor, and after 30 more minutes or so, my water broke and we called the midwife.
My doula arrived first and the midwife about 30 minutes or so later. The contractions were getting more and more intense so I labored in the shower for a little while, then back to the bed for a while. My vocalizing got longer and louder as the contractions got more intense. The midwife examined me and said I was about an 8 or so. Eventually my doula suggested I go to the toilet as I hadn't been in a while, and I had a few good contractions while there as well.

So back to the bed, my doula made some support structures from the pillows. It was getting so intense and I was worried about being stuck in pushing mode for 5 hours again. As the contractions got more intense I found that pushing a little bit helped and I started to feel more and more pressure as Kairu came down. I got into my comfortable yet not ideal position again, on my back propped up by pillows and my doula, and started to push as I was ready. My midwife and  doula observed how my stomach was moving, and I told them I was feeling pain/pressure right in the area where my pubic bone was. I soon found out I was having the same issue I had when giving birth to Chinami. My cervix was not quite letting the baby through, and because of how I carry my babies, right out in front, my body was having a hard time getting him over the pubic bone. So this meant I had to use all my strength again, and push him and help my body get him over that bone and through the cervix. My midwife helped the cervix "pop" back, so then it was just getting him over the bone. If I could just do this, he would likely come right out. So Yasushi set up the camera, and he came in with Chinami. Chinami had been spending the whole day doing whatever she wanted, but when she came into the room she was a focused little member of my birth team, I'm so proud of her. She rubbed my tummy, told me to do my best, gave me kisses on the cheek (oxytocin boosts!) and as my doula pulled me up into the final squat on the floor Chinami watched intently as I pushed and actually screamed in pain several times as Kairu finally slipped out into Yasushi's hands. He cried a strong cry immediately after coming out and pinked up pretty fast as we waited for him to get all of his blood from the placenta. Chinami commented that Kairu came out and he is so cute, and also commented that "everything is red", nonchalantly looking at all the blood. The placenta came out in another 15--20 minutes or so, and my midwife gave a chunk to Yasushi so he could make me a smoothie. Chinami helped as well, getting towels for us, taking picture/video with my camera, and holding the ziplock bag open while my midwife got the rest of the placenta in it. We finally cut the cord, and Kairu was already nursing like a pro.  I took some Tylenol and AfterEase (an herbal tincture for the after birth pains), had some chicken soup, and iced up my tender area as Kairu and I settled into bed for some much needed rest. Eventually Chinami and Yasushi joined us, reading a story before they drifted off.

Kairu was born at our home at 6:50 pm on March 16th. He weighed 9lbs and measured 21 inches. We are all in love with him, and I am grateful for my amazing family and birth team.

He is now still not even 2 days old, and I am still dealing with lots of aches and pains, but recovery is going well. I can't wait to put him in my k'tan and take little walks with him and Chinami. And by the way he nurses now, I feel like the 50+lbs I put on this pregnancy won't be there for too much longer! 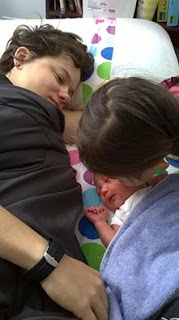